What is equestrian vaulting? 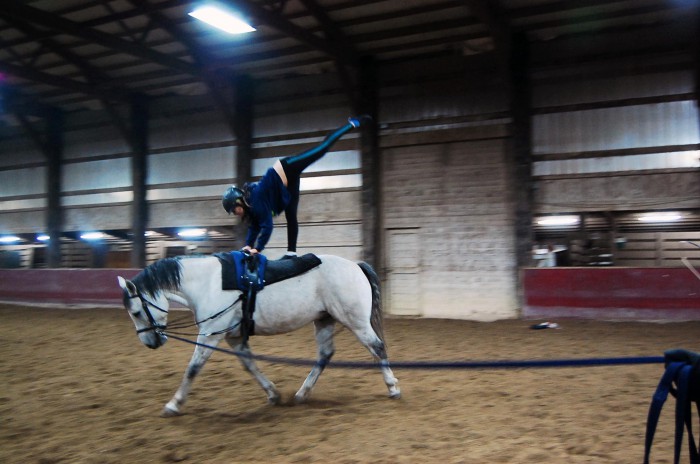 The sport of equestrian vaulting is best defined as choreographed gymnastics on a moving horse, with competitors competing in compulsory and freestyle categories.
Equestrian Vaulting combines gymnastics and dance on the horse and barrel. Vaulting is a team sport and helps building confidence, balance, strength and coordination while it is a funny way to work with horses.

Competitors can compete in solo, pasdedeux (duo) or team events. A team event is made up by six vaulters, with up to three on the horse at one time.

In addition to competition, vaulting is also a form of artistry, recreation and entertainment.

We focus more on this kind of vaulting: artistry, recreation and entertainment!

Vaulters range in age from 3 to 30 years and older, practicing individual and team skills and routines. The youngest athletes begin at the walk gait and progress to trot, and canter, based on strength, height, and ability to mount and performing on the horse.

Vaulting is also used on a therapeutic level in some cases. People with disabilities can often benefit from interacting with the horse and team members, and by doing simple movements with the help of “spotters.” Also vaulting can often be watched on a recreational level, too.

More popular in Europe, vaulting is still relatively unknown in the USA. We want to support the sport and make it more pubilc.